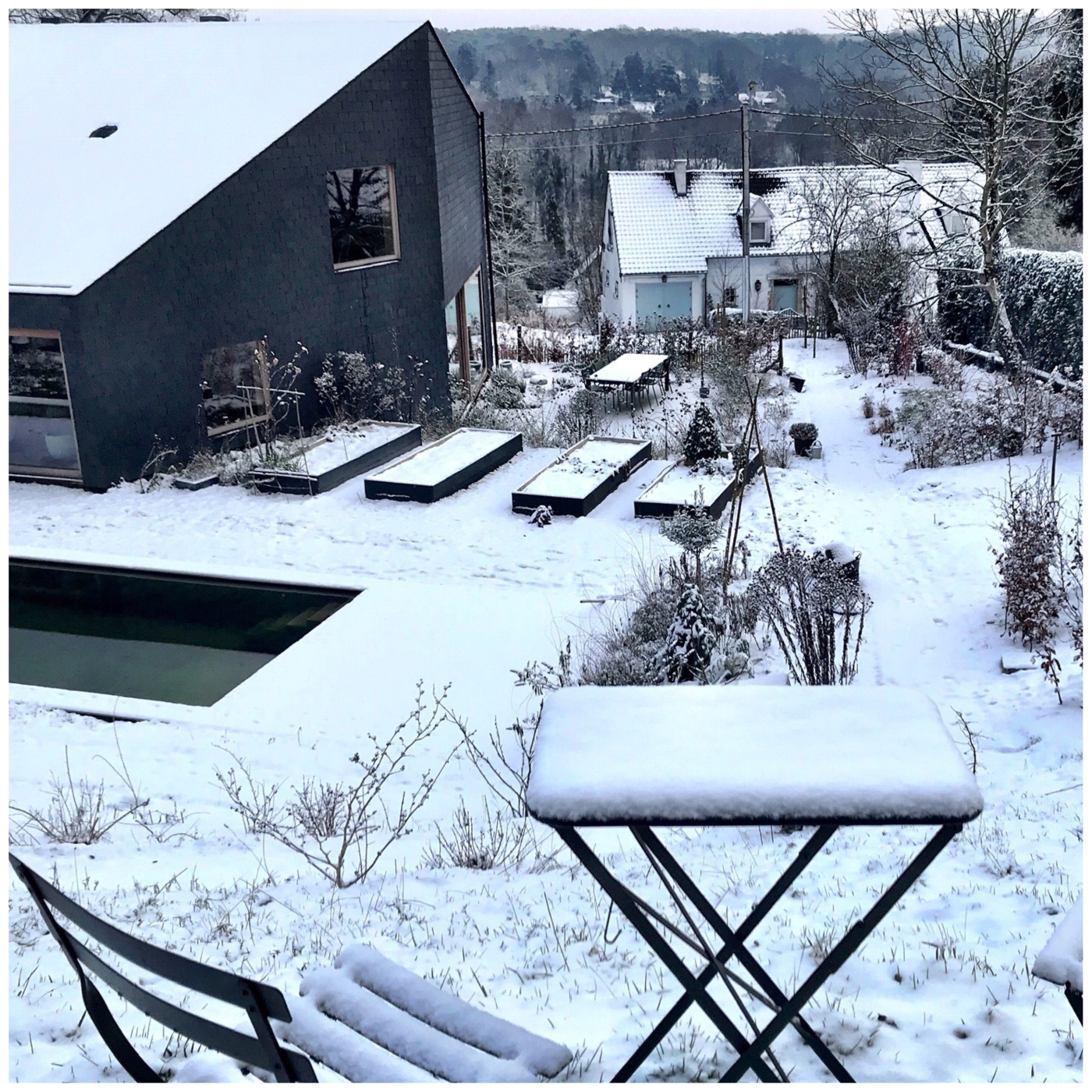 Working in the garden in winter is sometimes challenging, especially when it starts freezing and/or snowing. But at the same time it’s quite a good time to tackle the structural bones of the garden… or in my case, create some new patches. I’ll tell you some more about those plans later in this post.

So winter for many winter starts with cleaning up the garden. Not for me, as much of the fallen leaves and branches provide great shelter for wildlife. Dead seed heads provides food for birds and gives some structure in the garden during the cold months. So it is not a bad idea to leave your garden in bit of a scruffy condition. It’s good to wait until late winter to start cutting and cleaning. So keeping it dirty is for once not such a bad thing. 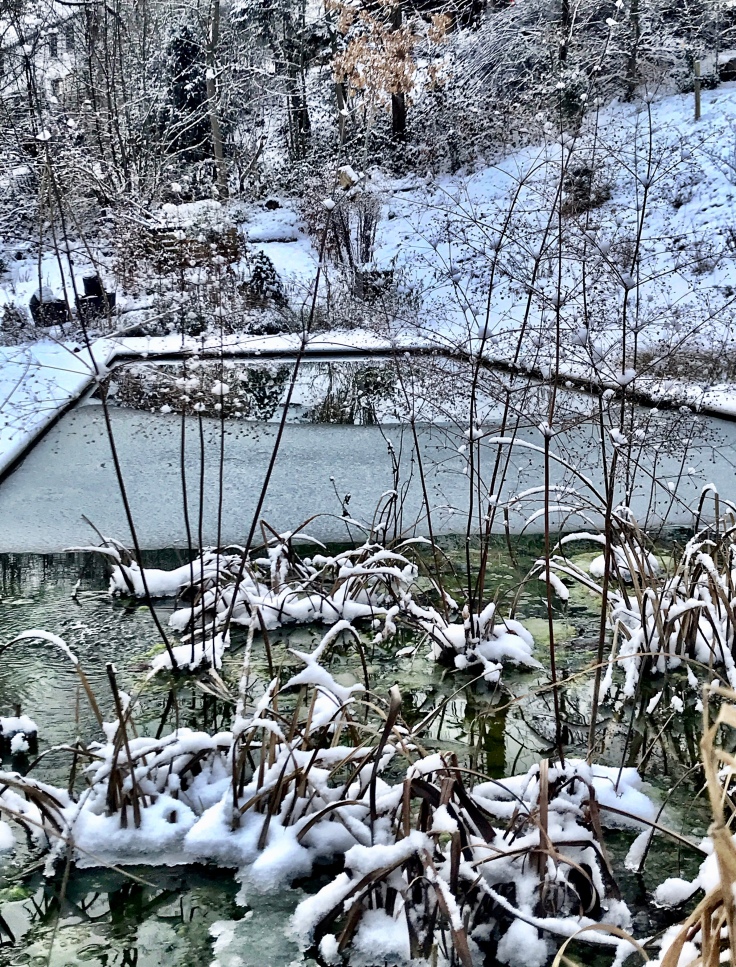 Speaking about birds, I might as well say a little word about a yearly event here in Belgium (and in many other countries) : the yearly bird count ! Every year Environmental organisations Natuurpunt and Natagora ask the public to count birds in their garden to get a better view on the decline or rise of the different species. So just for the record I give a little overview of the visitors in my garden during the count :

Somehow I think they like to hide when it is the counting weekend, as many species I observed in the garden were not visiting that weekend. In total I observed 33 different bird species in the garden throughout the year and half that we live here.

As I told in the beginning of the post, this winter I am trying to create two new parts in the garden. When we just started the garden I installed a compost zone, but soon I found out it was visible from many places in the house and garden. On top of it the zone around it became a bit of a storage space of pots, bags and stones I dug up. So earlier this winter I moved this compost corner more up the hill and planted a hedge around it. It is definitely more neat and less visible.

By removing the compost zone and cleaning up the surroundings a bare patch of 6 on 4 meters provided me with a new project : a berry garden. I already had quite some berry plants and raspberry bushes spread over the garden, so this was the perfect opportunity to bring them together. But first I had to fill up that whole part of the garden with loads of soil. As I was planning to dig out part of the steep slope in our garden to create a new flower and vegetable bed the problem of getting a good amount of soil was solved. 20 wheelbarrows of soil moved from one part of the garden to the future berry garden. When all that was done, it was time to plant. My dear parents bought me different kinds of berry plants for my birthday in January and together with the existing plants they form now the backbone of this new part of the garden. So now I have two rows of raspberries (summer and autumn : complete list at the bottom of the article ), a big redcurrant plant, two white currant, blackcurrant, some gooseberry plants and for the shady part a blue berry bush (some more still to plant). For now the Rhubarb plants can still stay here as well and keep the berries company. For most part I plan to put a good layer of bark in between the bushes, and wild forest strawberry as a ground cover near the main path. A trellis with different kind of clematis will brighten the whole place up.

Also in progress, a brand new flower bed near the swimming pond. I started to dig into the slope to widen the flat part next to the pond and in front of the green house. This will provide me with 18m2 of extra space, which will be used for a combination of flower and vegetable patch. I am about halfway with the digging now, but the hardest work will be building up a retaining wall. This wall will be about 60 cm high and 10 meter long and will be completely build up with cheap concrete pavers. I still have some recycled pavers that will be the base of the wall, the more visible part will be done with black concrete ones. In between the pavers I will create some plant holes and even some insect hotel parts. I know it sounds rather scruffy, but I think it will come out very well. I promise to show pictures of the result when ready :-).

Another little project was giving one of the plant containers a winter make-over. A combination of Hellebores Viv Victoria, bright red stems of cornus and some ivy did the trick.

So that is it for now… in the meanwhile I am ordering new vegetable seeds and start preparing for sowing vegetables and flowers for the upcoming season. Enjoy winter ! 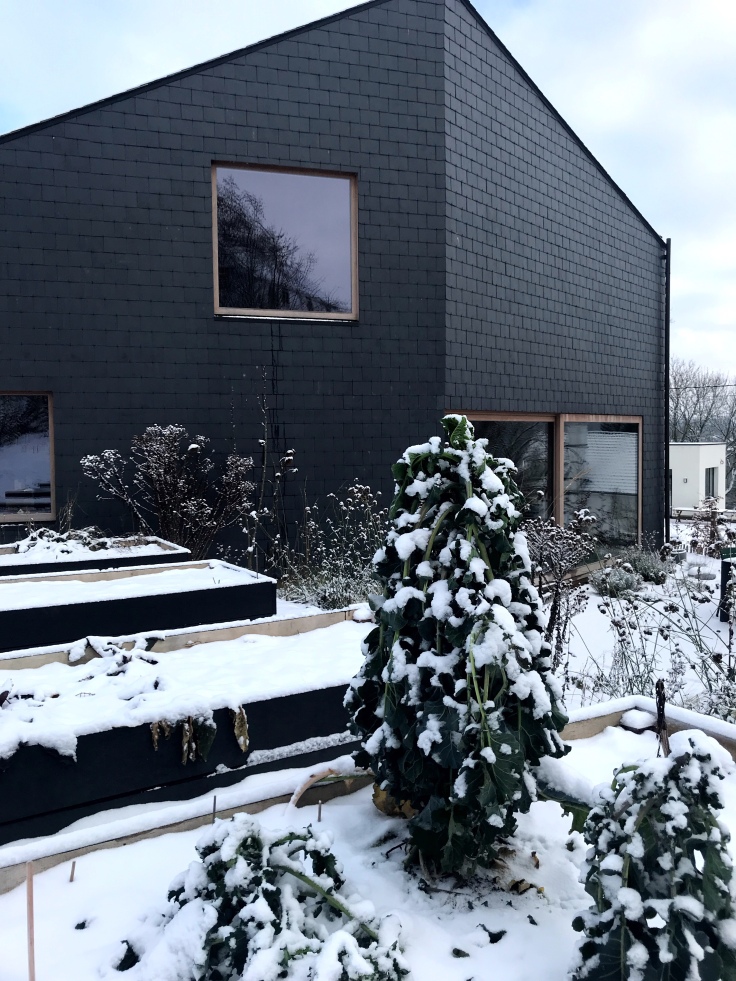