For this week’s post I take you to Dordrecht to get inspired by this beautiful city garden. When Herman and Bram moved from Brussels back to their home country, they decided the garden of their new house needed a big make-over. Garden designer Mark Kino from Gedeelde Ruimte in Amserfoort already did some smaller works for Herman and Bram and was the obvious choice to handle this rather complex job.

Mark always aims to make a very personal garden design and therefore he tries to know more about his clients. In this case this reflects on the mediterranean atmosphere and plants that evoke Bram and Herman’s many travels to southern countries, but at the same time the garden has many real Dutch elements. 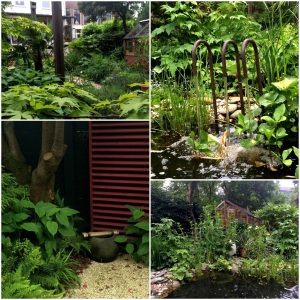 One of the difficulties of this project was to integrate a big wish list in a rather small garden. Mark managed to integrate a pond, greenhouse, small vegetable patch and big terrace  on the 150 m2 of land. Another challenge was to hide the ugly mishmash of garden walls. At one side he did this by putting the concrete panels in a dark colour and put some vertical dark red wooden panels to bring rhythm.

At the other side the new greenhouse covers up a large part of the border wall. Although this garden is still very young it already gives a full grown impression thanks to the two older remaining trees ( a prunus and a hawthorn) and by adding some structural volumes. These volumes are big oak frames that guide the eye to the back and also manage to make the garden look deeper than it actually is. 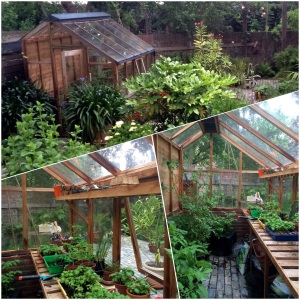 Mark made use of a wide range of perennials (Echinacea, geranium, lavender, rudbeckia…) to have the garden in bloom throughout the year. In the shadow part he worked with ferns and other shadow plants. The center of the garden gets some more volume by adding the exotic looking Fatsia Japonica. The back is covered in shadow and here you even have a bit of a Japanese atmosphere. One of the eye-catchers in the garden is the greenhouse. This beautiful and handy addition is made of wood and rests on a small brick wall. This is the perfect spot to overwinter the more exotic pot plants like the Agapanthus and Oleander. In springtime it serves to grow the seedlings for the vegetable patch. 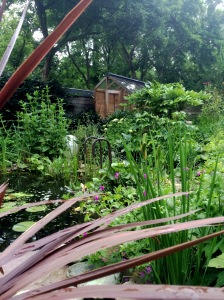 Another wonderful part of the garden is the pond, right next to the terrace. It’s not only visually pleasing, it also attracts life in the garden and adds to the biodiversity. The minimal fountain in the pond is also designed by Mark and creates a constant soothing sound of running water on the terrace and veranda. To acces the garden toward the back there are two meandering paths. One with fine gravel and another with beautiful reclaimed blue scoria bricks. Mark also drew a complete lighting plan for the garden that exists of 3 clusters and highlight different aspects of the garden in the dark. An important aspect that in many gardens is absent or not worked out properly.

Last year Bram suddenly passed away and this tragedy gives the garden an extra importance. A remembrance rose now adorns one of the oak frames in the garden. Herman also added more of Bram’s favorite Dahlia flowers to the garden, making the garden a place of reflection and remembrance as well.

Mark Kino did a very good job and managed to make an exciting garden that stands out and at the same time creates a peaceful haven in the city. If you want to know more about his work you can take a visit to his website (in dutch) : http://www.gedeelderuimte.nl .