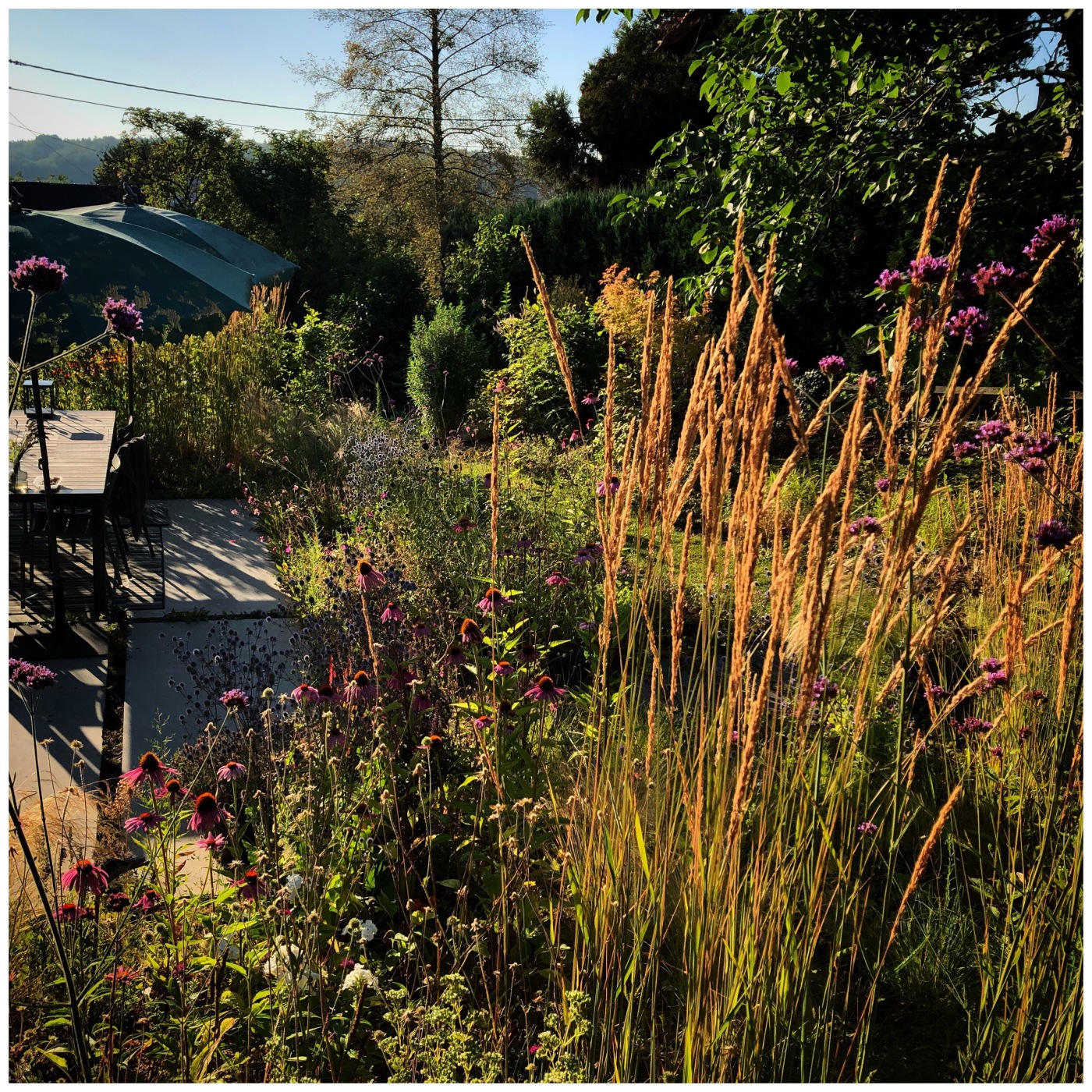 The summer is in full swing and also this year we had extreme dry and hot weather. Last week the temperatures went up to 40°C and I can tell you, the garden does not really favour that kind of temperatures. The Prairie planting might be the exception, but even for those plants it became a bit too much. I have decided that I will give up on plants that didn’t make it through the heatwave and I am now looking into more drought tolerant plants to replace them with. I am also planning to plant more trees in the garden this autumn/winter to at least create some more shade. But let’s have a tour through the garden.

As I mentioned, the prairieborders were not that much affected by the dry weather. The Echinecea were in top form, as were the Heleniums. Even the newly planted prairie border does quite well. And the sea of poppies filled all the empty spots in the border, giving it an already full look. I have the impression the verbena was a bit less present this year, but I noticed a lot of seedlings that I will move to the places I want them. 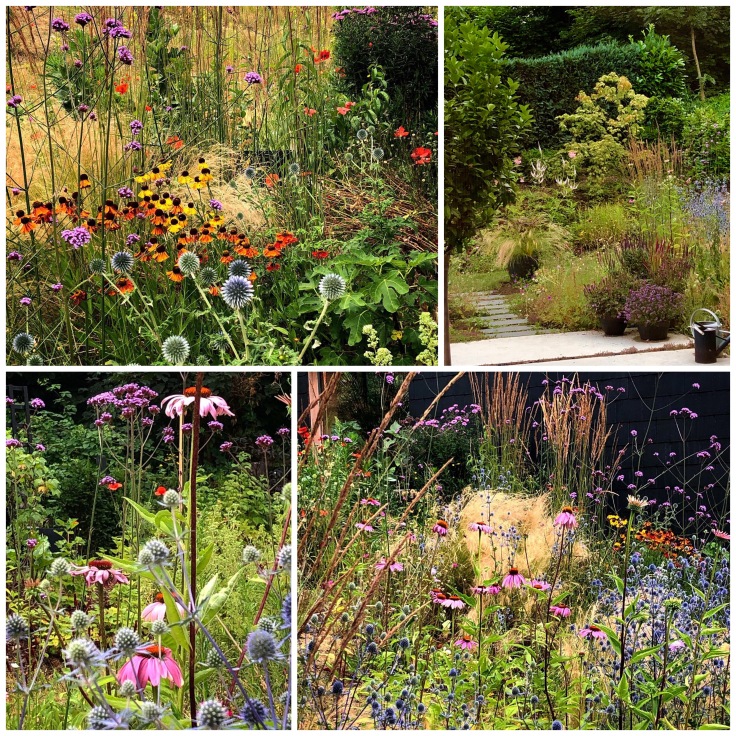 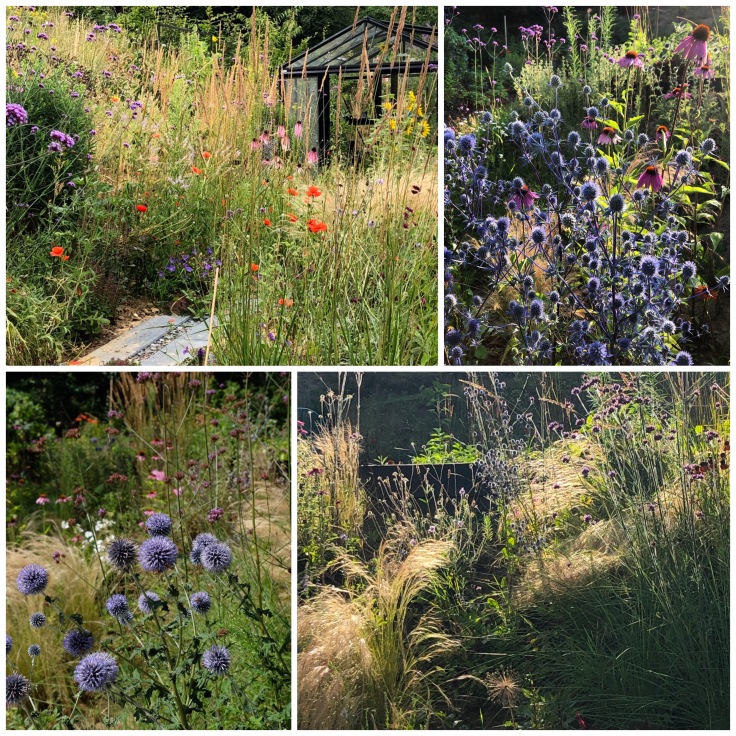 In my previous update I was complaining that the wildflower meadow didn’t gave much this year, but oh boy, I was wrong. In June the slope was covered in a hew of purple of the campanula and blueweed, dotted with white from the daisies. When those were bloomed out achillea came in bloom and different kind of yellow flowers joined in. On the pictures you can see the two fases very well. Due to vacation I was a bit late to do the mowing, but that is done now. I leave the mowed material a few days to give the flowers the chance to drop the seeds. After that I will remove it as we don’t want it to fertilise the meadow.

Mixed feelings with this part of the garden. Everything seems to be almost a month later then last year. The bell pepper bushes are a bit sad, although they started to produce some bell peppers. It was too hot for salads and radish, so not much harvest there. Now cucumber season has started and it looks we will have plenty of harvest. Also tomatoes are doing well and the courgette is at least giving some more then last year.

Berries we had plenty this year. We couldn’t keep up with the strawberries. But also currants, gooseberries and blue berries did very well. Now the blackberries are giving a lot of fruit. Cherries were a bit less this year due to a little freeze in spring.

Nothing special to mention here. The drought seems to have not had such great effect on this part of the garden. And even the ferns are doing well.

Although it took a while to warm up this spring, we had so much joy of the pond again this year. Last few weeks it had quite some temperature changes (up to 28°C), which last year would create an algae problem, but this year the algae growth is quite under control. Since May we had the opportunity to swim in it every day and it became my main sports activity to do laps in it. 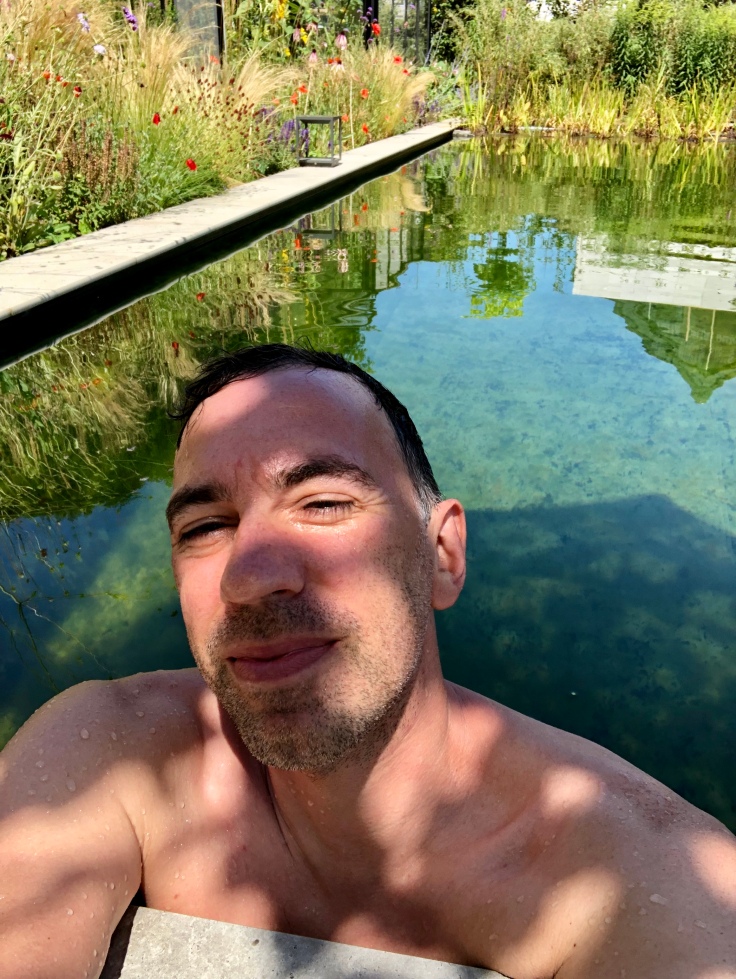 I leave it to this, as pictures say often more than a thousand words. If you have questions or remarks, feel free to leave them in the comment section and I’ll be glad to answer them.