It’s about a month ago since the last garden update. And in this month the garden came really to life. It was quite a cold month though and we had night frost even a week ago. This is not that bad when you are a patient gardener, but I made the mistake to plant out too many frost sensitive veggies too early. Luckily the losses were little, as I had a big roll of fleece to protect the tender plants from the cold. But now that is over and everything can go out !

The berry garden I made this winter is doing quite well, and all bushes are already bearing some (unripe) fruits. The gooseberries are plenty and if everything goes well it will also be a top year for strawberries. We already picked the first honey berry as well. It seems we will even have some grapes this year.

In the glasshouse I planted the tomatoes (Green Zebra, Orange Queen, Black Krim, Violet Jasper and Fahrenheit Blue), Calcutta Chili peppers, Little finger aubergine and Mandarine Bell Pepper. The Fahrenheit Blues tomato has some problem with too much energy and expresses so by curling the leaves, that also are a bit darker. That problem should be solved when it starts flowering and becomes bigger. Most of the tomatoes are already having the first flowers on, so that is quite exciting. 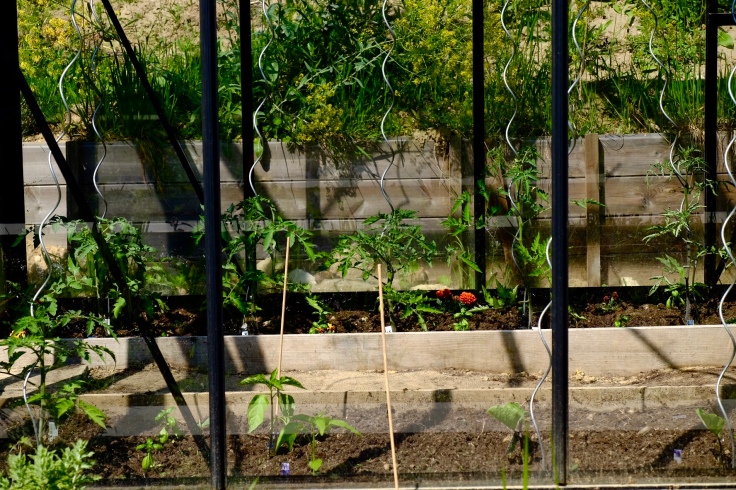 In the raised beds the sowed veggies seem to grow slow, but with the sunny and slightly warmer weather they might get a bit of a push (I hope). Next time I will talk a bit more about the veggies that are growing here… or failed. 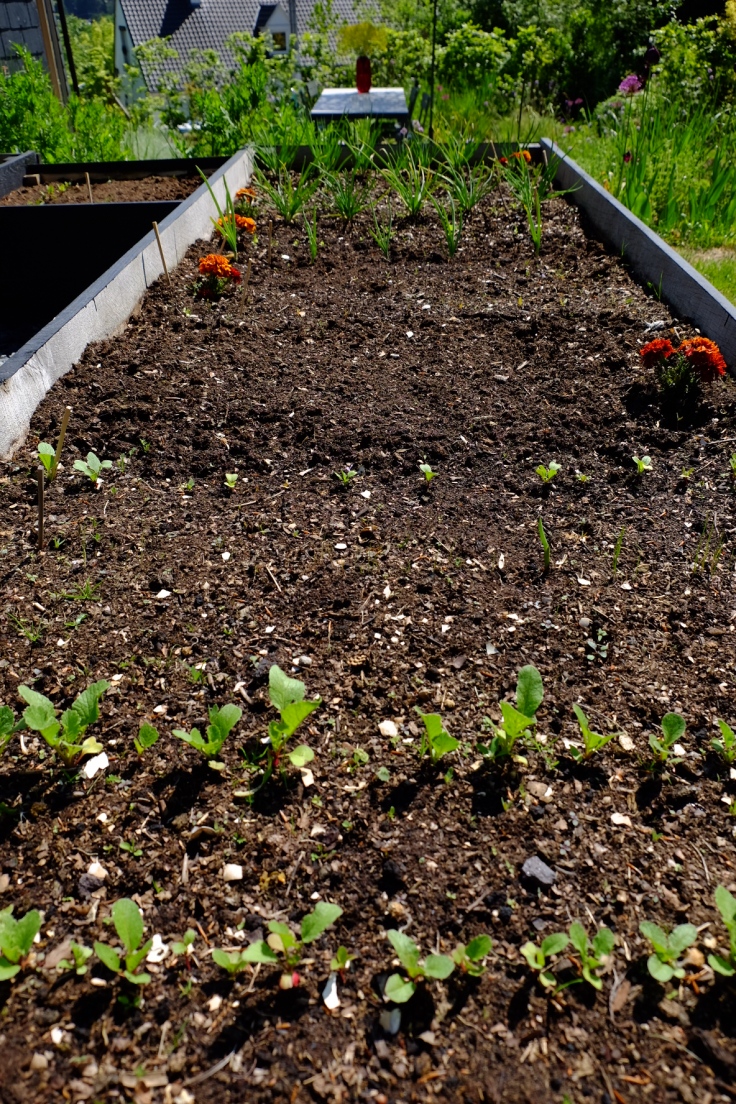 The small shadow garden at the north side of the house is mostly doing well. It is filled with Comumbines, hosta, geranium and different kind of ferns. I noticed that this, normally, humid part of the garden had some drought issues due to the unusual North-East winds we had lately. But that should be just a temporary problem. We also added some rhododendron bushes to this part of the had too be saved from the dry upper forest  soil. 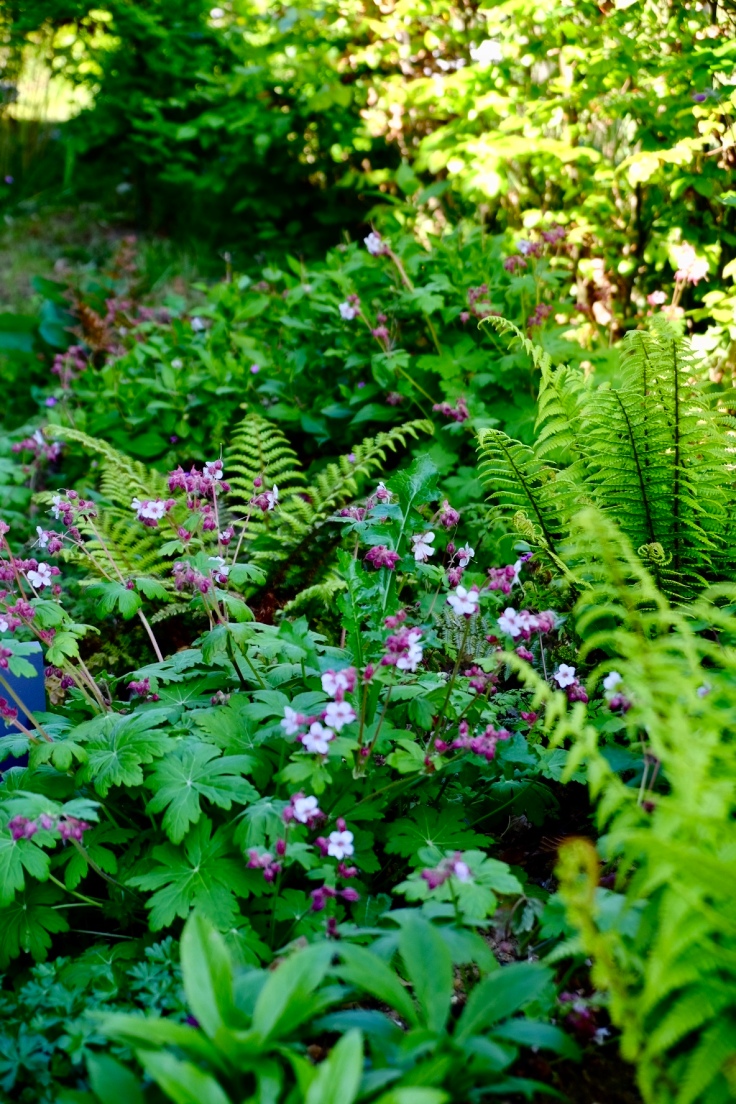 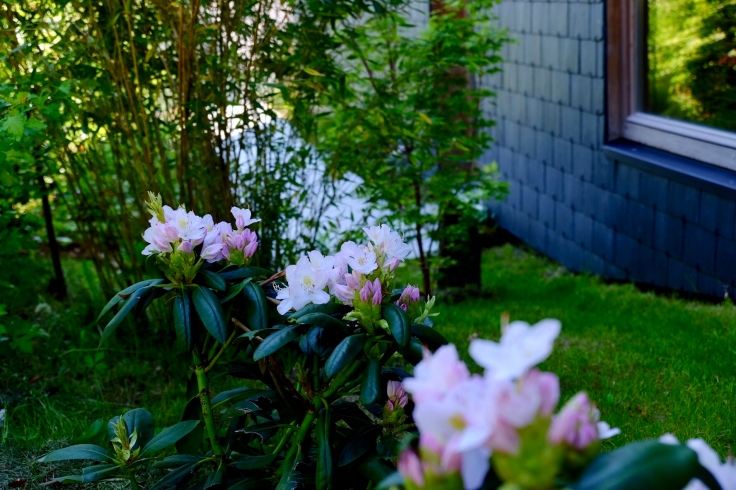 The prairie garden that we planted last year is now doing very well. Many plants have self seeded and I think in one more year the bare soil will be mostly covered. To know more about it you can have a look to this older post : Planting a prairie garden. The new border next too the pool has mostly the same perennials than the zone around our terrace. The addition of alliums to those two parts of the garden worked out very well and I will surely add some more this autumn.

The fruit trees are bit of a mixed story this year. The old cherry tree has less cherries then last year, but the new cherry tree now bares fruit for the first time. It also looks like the quince tree will have its first fruits. Most of the apple trees did well, but once again the old one has almost none. We’ll see later in the season if the rest keeps the fruit. 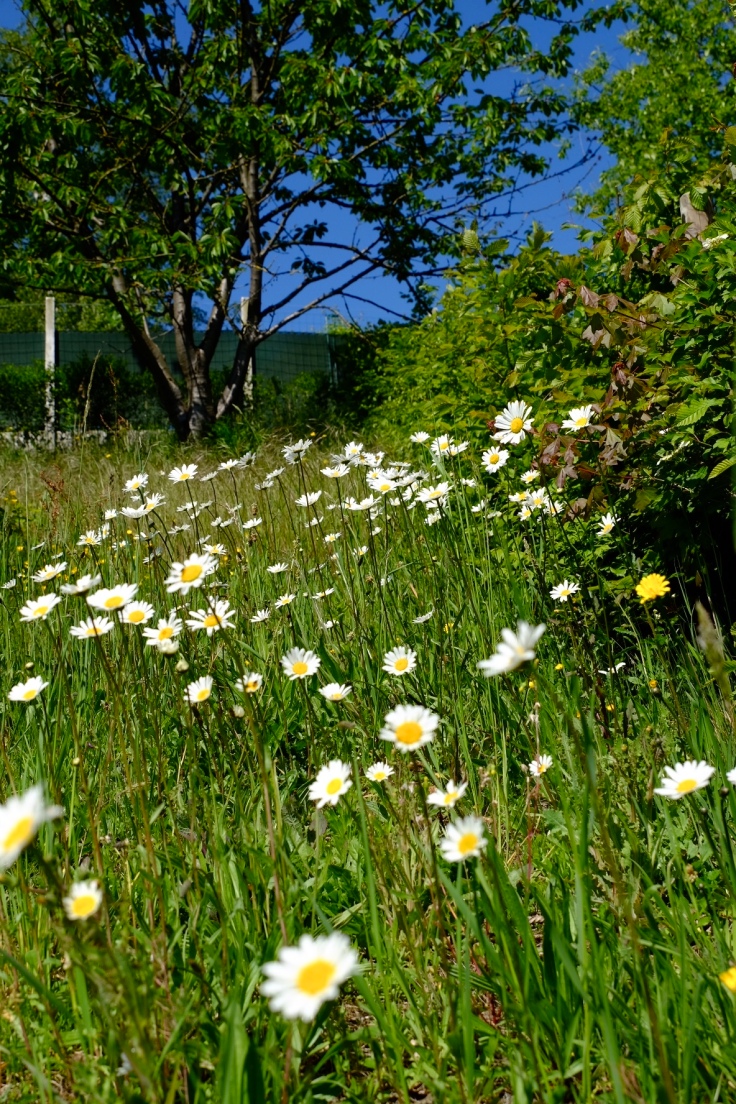 The flower meadow is not such a succes this year. I think I made a mistake last year by using a lawn mower instead of the bush cutter, so the wild flower seeds ended up on the compost heap instead of on the soil. Grasses took over for a large part. So this year I will have to return to the old method of cutting the meadow. The daisies however are doing a great job and I am sure some other flowers will pop up later on. 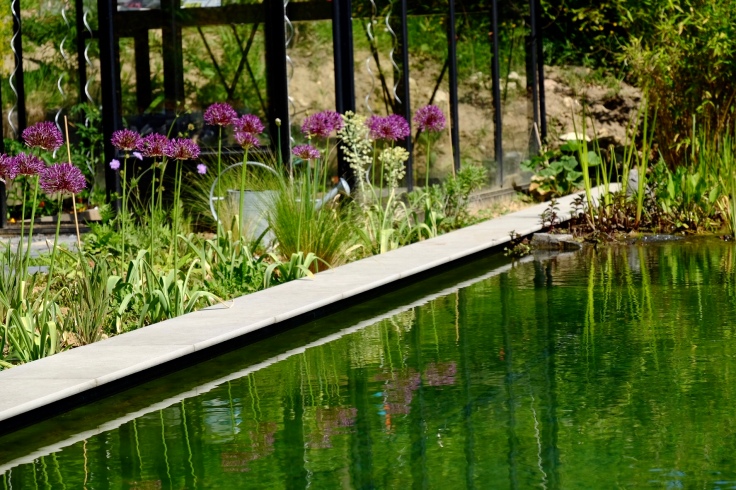 So that was a little update on the garden. Ah and the pond : 16 °C… so still a bit too cold for a swim. But in good shape nevertheless 🙂 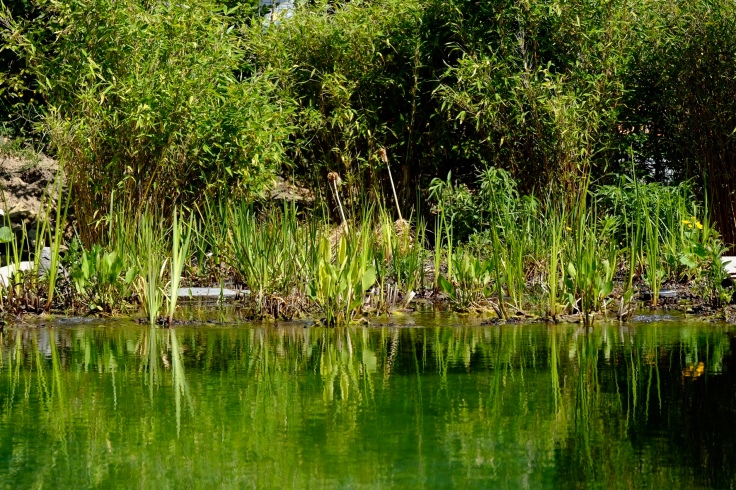