The summer is coming slowly to an end and what a summer it was. Before I got a garden I would never have complained with all that sun and hot temperatures. The least I can say now is that the circumstances were not ideal for the garden. The drought claimed some victims among my newly planted garden and I better stop thinking of the enormous water bill that will surely come. But that said, the hot dry summer had also some very pleasant side effects. Let’s start with the vegetable garden. 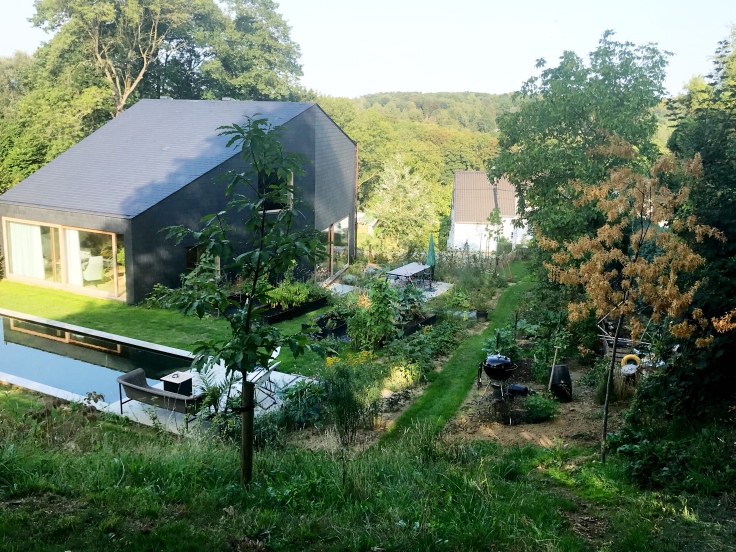 As I just said, for some of the vegetables this was a great summer. We had cucumbers in abundance and also much more tomatoes than we could eat (still going on). The tomatoes did even very well outside without any protection. Other veggies that did well were the Romanian bell peppers, aubergines (although they got some sunburn and turned yellow, but still yummy). Beets, carrots and onions did also great. Some people told me it was a Wonderfull courgette year, but mine failed a bit. Pumpkins are doing fine and I even managed to have one very sweet delicious melon. Oh and then I forgot to mention the crazy amount of hot chilli peppers in the glasshouse.

What didn’t do well was salad and radish during the hot season. I think next year I will give them a bit more shade.  Also the corn was not that great and I harvested them a bit too late. All in all this was not a bad start for the first gardening year.

Although a prairie garden loves some good dry summer, it suffered. The plants I planted in spring didn’t develop and some came quite late in bloom. The nice thing is that since we had a bit of rain some started a second bloom period. As if they wanted to make up for the first part of summer :-). The verbena did a wonderful job though surrounding the terrace with its purple flowers, attracting lot of bumble bees and butterflies. The geranium dilys did a great job and made a nice ground cover. At this moment it’s the sun flowers, Japanese anemones and asters that bring a lot of joy in the garden. Next year I will add some more grasses, as I found out the ratio perennials vs grasses could be better. 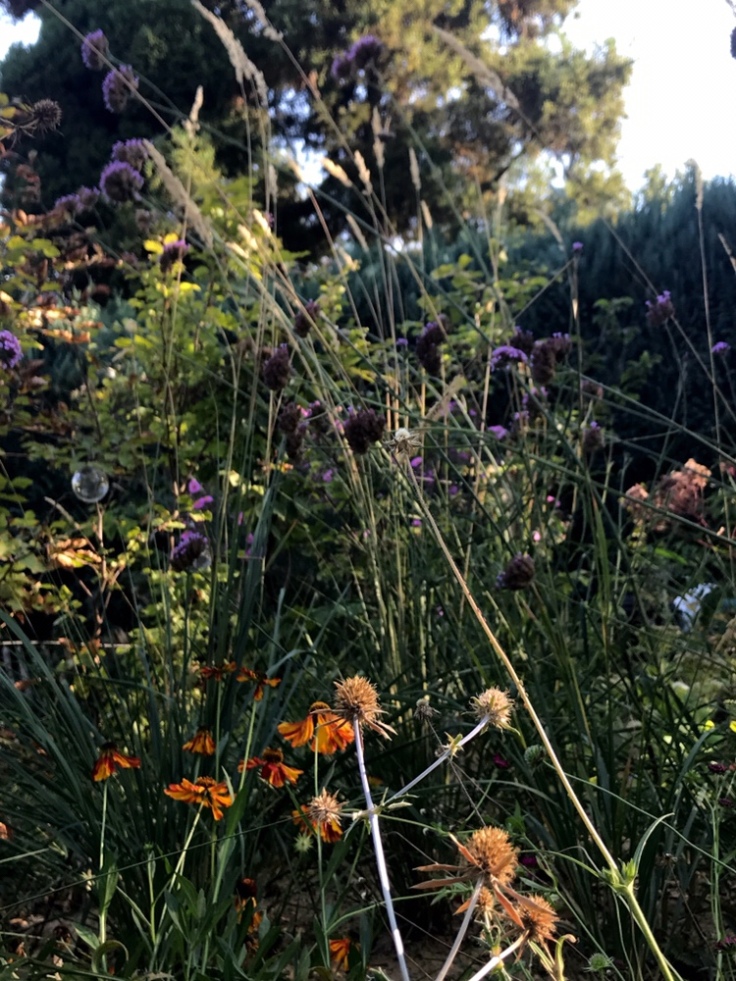 Some parts of the garden we just covered with mixed flower seeds and also they still give a lot of color in the garden. Will surely repeat that next year. 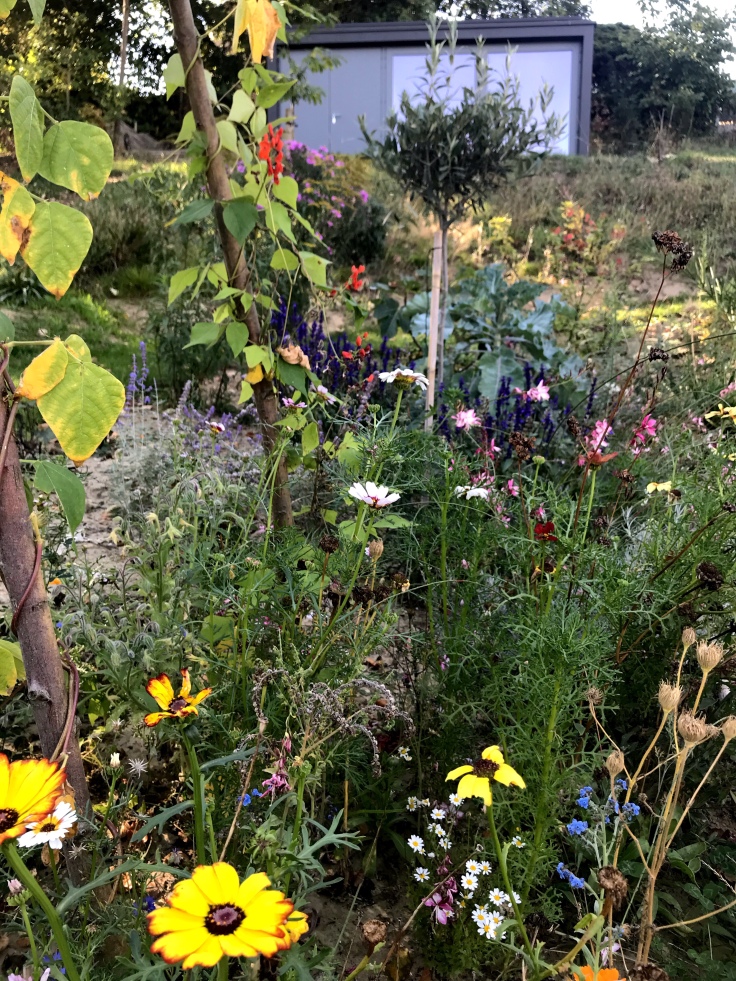 The shadow garden did ok, although I found out that a part of it didn’t get enough shadow and plants there battled. To my surprise it were not the ferns though, they kept very well. A small Acer palmatum got some sunburn damage. I am thinking of putting a small tree to block out some more sun. 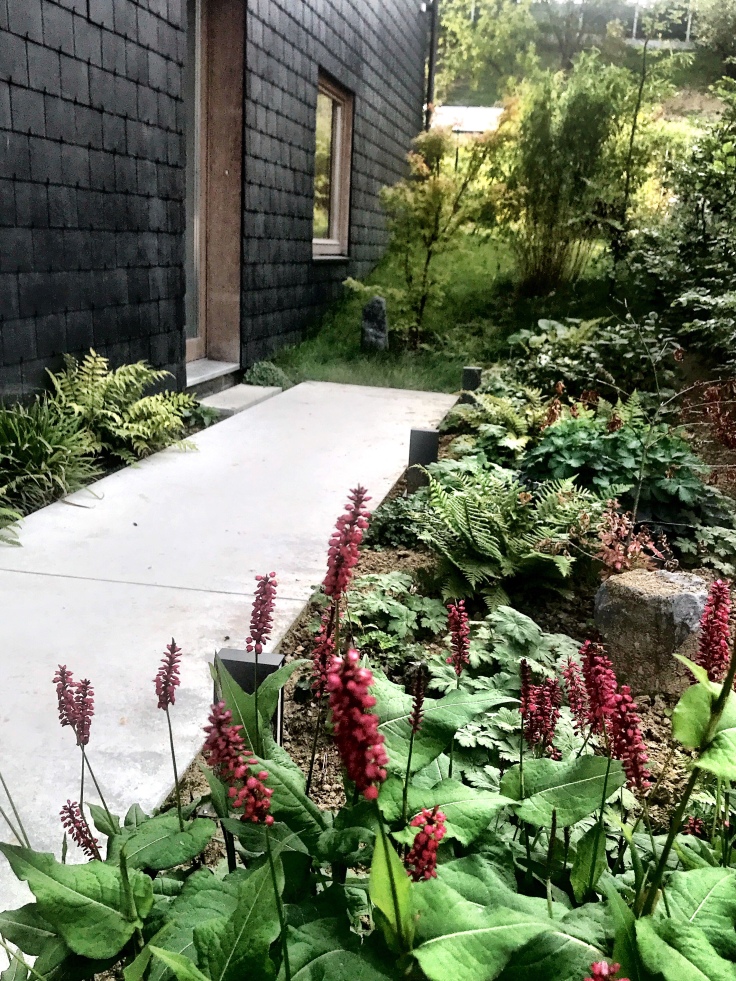 We couldn’t have hoped for a better summer to have the pond. Since the end of April we almost used it every day. In the heat of summer the temperature of the water went up to 28°C. The downpoint was that blanket weed thrived as well. So some upkeep and removal of it was needed now and then. But it was definitely a pleasure to be able to swim in this chemical free water in between some stunningly beautiful dragon flies. The plants in the plant zone grew in quite a lot as well, giving it a nice backdrop. The fish in the pond (5 ides) seem to be ok as well. They always hide under the stairs when you show up, so they are not that social 🙂 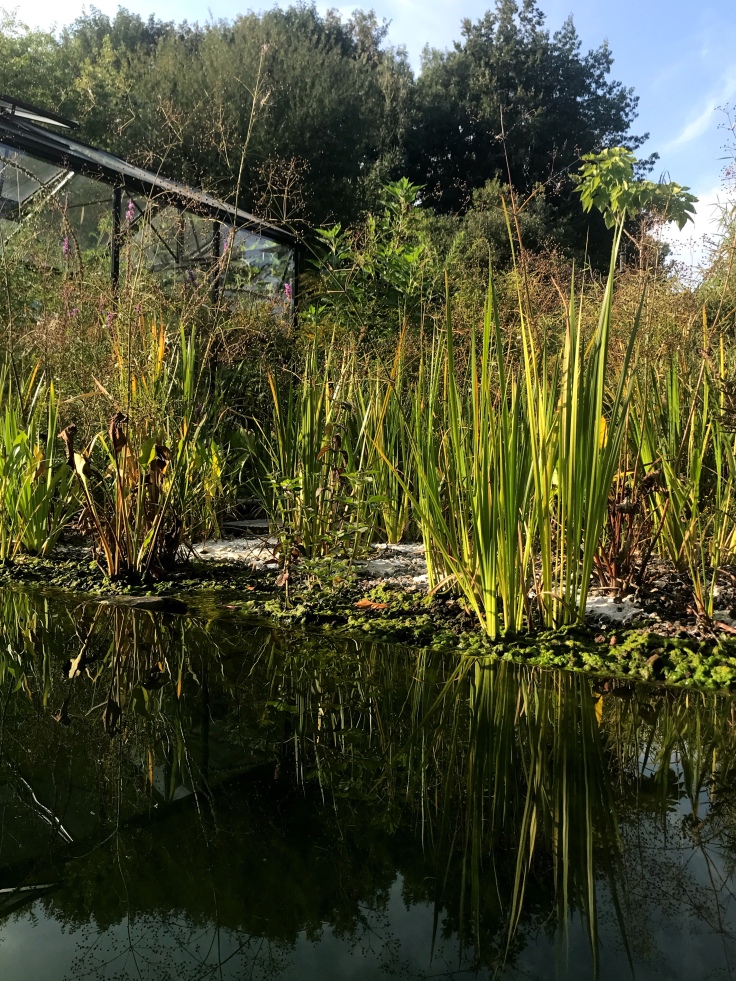 So that was the extremely dry summer in our garden… a first summer in which we had all the luck to enjoy the garden to the fullest. 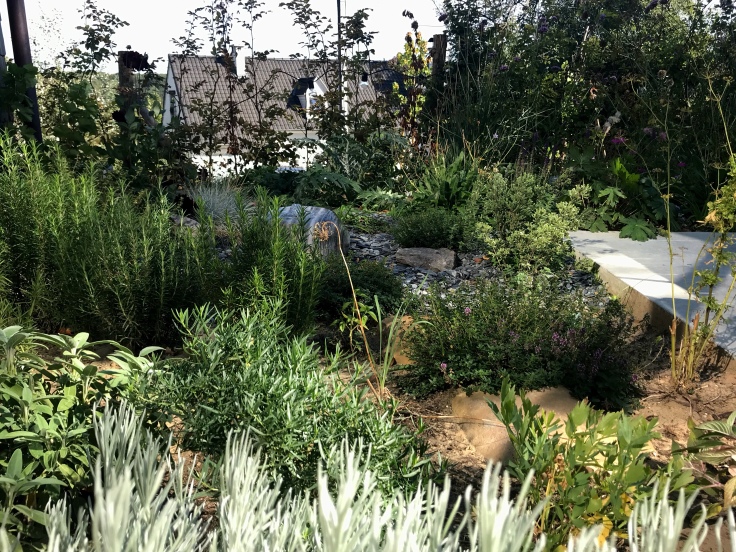